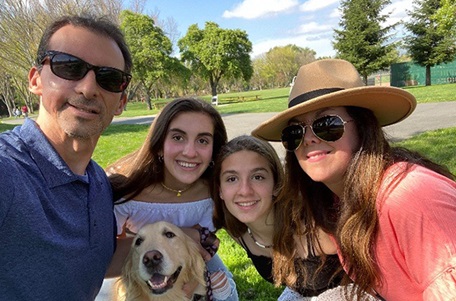 2007 was supposed to be an exciting time for my family. My wife and I were expecting our second daughter in September. That summer, however, I began to experience a chronic sinus issue. A minor surgery to remove a cyst in August resulted in a diagnosis of maxillary sinus cancer.

As luck would have it, I was able to make an appointment with Dr. Jason Newman at Pennsylvania Hospital (PAH) during one of my wife’s final checkups with her obstetrician. Dr. Newman sat with us and discussed the road ahead. It all sounded overwhelming but I felt reassured: I was where I needed to be.

The Start of a Long Journey

The road began with my nine-hour surgery. Exactly one week later—with only six days of recovery—I returned to PAH, but this time as a visitor for the birth of my daughter, Taylor. Less than a month later, I began eight weeks of radiation and chemo. I was lucky to be on prolonged paternity leave: While treatment was difficult, this time with my newborn was the silver lining I needed.

As I started back to work in February—while doing our best to manage our newborn as well as a rambunctious three-year-old—I found myself back in the hospital, where they discovered another tumor, this time near my temple. This meant another nine-hour surgery with Dr. Newman and Dr. Liza Wu, where they removed my left fibula to help reconstruct my right jaw.

Because Penn was still in the process of constructing its Roberts Proton Center, my care team needed to refer me elsewhere. I was turned down by several other centers, but Penn didn’t give up and neither did I. Working tirelessly, they managed to get me referred to Massachusetts General Hospital (MGH) in Boston for proton therapy. While I would have preferred to stay in Philadelphia, due to the complexity and location of my tumor, I was relieved that MGH would take me.

This time in Boston offered yet another unlikely opportunity to make memories with my family. They came to stay with me for a few weeks. I cherish those memories and the distraction from my treatment. My wife and daughters have been my constant comfort during this entire experience.

Unfortunately, my cancer journey didn’t stop when my treatment ended in August 2008, not even close. I spent the next decade in and out of reconstructive surgeries, but Penn has been there with me the entire time. When they couldn’t treat me, they found me the best physician who could—even if it was at another institution. At Penn, you are never just a number. They make you feel as if you are their most important patient, and care for you as a whole person.

Finding Strength through Passions and Positivity

As a former swimmer, I have found recovery in athletics. Beginning in 2009, I began biking. Three 100-plus-mile “century rides” and countless other long treks later, I started competing in triathlons, runs, and open-water swims. I also became the coach of my older daughter Alexandra’s field hockey and lacrosse teams. After relocating our family to San Francisco for work, I competed in my last triathlon, which included a swim from Alcatraz!

Today, as we practice social distancing, I try to stay safely busy coaching lacrosse for my girls, working, and enjoying the natural beauty of Northern California as a family. I do miss all of the important people in the great city of Philadelphia: our friends, family, and my exceptional care team at Penn. I don’t know where I would be without them.

That is why I look forward to getting my family together this summer to be part of the virtual Breakthrough Bike Challenge to help support novel cancer research at Penn Medicine’s Abramson Cancer Center. I am so grateful for everything, and I want to do all I can to pay it forward to help other families, the way Penn helped me and mine.

NOTE : This article has been taken from pennmedicine.org as it is. Click here to read original article.

3 Tips for Coping with News-Related Stress and Trauma

FAQs: Cancer and the COVID-19 Vaccine